Homer A. Macapinlac, MD, FACNM to Give 2019 Taplin Lecture at Western Region Meeting

Tucson, AZ – Homer A. Macapinlac, MD, FACNM from the University of Texas MD Anderson Cancer Center in Houston has been selected 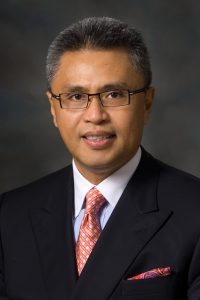 to give the Taplin Lecture at the 2019 Meeting of the Western Regional Society of Nuclear Medicine to be held November 1-3, 2019 at the Hilton El Conquistador Resort in Tucson, Arizona. The annual Memorial Lecture is named after George V. Taplin, MD, distinguished physician and a pioneer in the development of nuclear medicine as a clinical specialty. His career in medical research spanned more than four decades and was devoted to developing new diagnostic procedures for better patient care.

Doctor Macapinlac is the James E. Anderson Distinguished Professor of Nuclear Medicine and Chair of the Department of Nuclear Medicine at the University of Texas M.D. Anderson Cancer Center in Houston, and holds a joint appointment in the Department of Cancer Systems Imaging. He is certified by the American Board of Nuclear Medicine, with a Certificate of Added Qualification (CAQ) in Nuclear Cardiology. He was also elected as a fellow of the American College of Nuclear Physicians. Prior to coming to M. D. Anderson, he served as clinical director of the Laurent and Alberta Gershel Positron Emission Tomography Center of Memorial Sloan‐Kettering Cancer Center, New York. Doctor Macapinlac is an active committee member of various groups, and has served as past‐Chair of the Institute of Clinical PET. He was President of the Society of Nuclear Medicine PET Center of Excellence and received the SNM Distinguished Service Award for this role. He is also an expert consultant to the IAEA, and an International Visiting Professor for the Radiological Society of North America. He has over 190 publications and is considered a national and international expert in the field of nuclear medicine and positron emission tomography.

In 1987 he came to the United States as a student for a Research Fellowship in Nuclear Medicine and MRI at the University of California San Francisco School of Medicine. This was followed by a Clinical Residency in Anatomic and Surgical Pathology at New York Medical College in 1987-1988, becoming Chief Resident in 1988-1989. Macapinlac became a Resident in Nuclear Medicine in 1989-1991at Memorial Sloan-Kettering Cancer Center in New York, becoming Chief Resident in 1991-1992. He then became a Clinical Fellow in Positron Emission Tomography and Nuclear Oncology at Sloan-Kettering.  It was after this Fellowship that he officially made the US his residence with the U.S. Department of Energy sponsoring his application for citizenship.

An enthusiastic volunteer and prolific author, Doctor Macapinlac has received many awards, including the President’s Distinguished Service Award from the Society of Nuclear Medicine in 2009.

At a personal level, he has been happily married for 29 years to his wife, Edith, whom he met at UCSF, and has two adult children.  He likes to cook and bake and is, in his own words, a deadbeat member of the Nuclear Oenophile Club, a wine appreciation group of nuclear physicians who meet over dinner once every SNM annual meeting. It’s core membership were past presidents on the snm and leaders of many nations nm societies including past presidents of the world federation of nuclear medicine and biology, EANM etc.

Doctor Taplin was the author of over two hundred and fifty scientific papers and presented over fifty scientific teaching exhibits. His first contributions in medical research were directed to treatment of pneumonia in the 1930s and the improvement of penicillin therapy during World War II, but he became best known for the development of new radioisotope diagnostic techniques, work that continued from 1947 to within ten days of his death. His contributions in medicine were recognized by numerous awards and honors. He was president of the Society of Nuclear Medicine in 1969-70 and received the Nuclear Pioneer Award from that society in 1975. He was selected as California Scientist of the Year in 1976 by the California Museum of Science and Industry. In June 1979, he was named to give the prestigious Fleischner Honor Lecture for 1980, but did not live to do this.