Monterey, CA – The Western Region Society of Nuclear Medicine (WRSNM) will honor Dr. Ramsey D. Badawi, PhD from the University of California Davis with the presentation of their 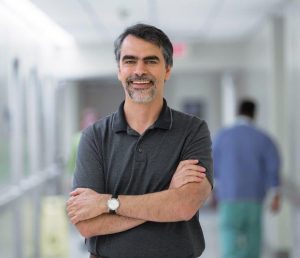 Distinguished Scientist Award. The Award will be presented to Dr. Badawi at the 2018 WRSNM Annual Meeting, October 26-28, 2018 at the Hyatt Regency Hotel in Monterey, California.  The Award is given annually at the WRSNM Meeting to an individual who has made significant contributions to the Clinical Science of Nuclear Medicine or Molecular Imaging.

Dr. Badawi is Professor, Chief of Nuclear Medicine and Vice-Chair for Research in the Department of Radiology, and Professor of Biomedical Engineering at UC Davis. He also serves as co-director of the Biomedical Technology Program at the UC Davis Comprehensive Cancer Center.

Dr. Badawi received his Bachelor of Science Degree in 1987 in Physics and his Master’s in Astronomy in 1988 from the University of Sussex in the UK. He obtained his PhD in PET Physics at the University of London in 1998, specializing in normalization and data corrections for fully 3D PET. After a postdoctoral fellowship at the University of Washington, Seattle under the mentorship of Professor Tom Lewellen, he joined the Dana Farber Cancer Institute in Boston in 2000, where he helped to set up their first clinical PET service. In 2004 he joined UC Davis.

Dr. Badawi’s lab developed the world’s first dedicated breast PET/CT scanner, and a low-cost ultra-high resolution scanner for mouse extremities that matched the highest resolution achieved for in vivo PET imaging. He is currently developing a low-cost re-configurable pre-clinical PET system for use in the developing world, a high-performance breast scanner, and a high-performance pre-clinical MRI-compatible PET scanner. He is also interested in applications of advanced reconstruction methods for parametric imaging in humans – specific applications include cardiovascular disease, non-alcoholic fatty liver disease and cancer.  With Professor Simon Cherry, he co-leads the EXPLORER project which is developing the world’s first total-body PET/CT scanner.

Dr. Badawi is married to Ania Mieszkowska, with two adult children, Nik and Alex. They live in Woodland, CA with their two dogs Arya and Cleo. Dr. Badawi is a grilling and BBQ fanatic, having been introduced to the art by the radiochemist and pitmaster Professor Tim Tewson during his time at the University of Washington. When not building PET scanners or grilling, Dr. Badawi volunteers for the Mankind Project, a training and education non-profit.