Vancouver, BC – The Western Region Society of Nuclear Medicine (WRSNM) will honor Dr. François Bénard from the BC Cancer Agency with the presentation of their Distinguished Scientist 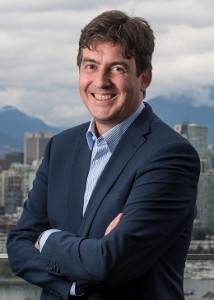 Award. The Award will be presented to Dr. Bénard at the 2017 WRSNM Annual Meeting, November 3-5, 2017 at the Westin Bayshore Hotel in Vancouver.  The Award is given annually at the WRSNM Meeting to an individual who has made significant contributions to the Clinical Science of Nuclear Medicine or Molecular Imaging.

Dr. Bénard is the Vice President, Research at the BC Cancer Agency, a Distinguished Scientist at the BC Cancer Agency Research Centre and Professor in the Department of Radiology at the University of British Columbia. He is also Associate Dean, Research at the University of British Columbia. In addition he holds the BC Leadership Chair in Functional Cancer Imaging. As a clinician scientist, his research interests are in positron emission tomography (PET), nuclear medicine, cancer imaging and targeted radionuclide therapy.

He has established extensive multidisciplinary collaborations, and he and his colleagues were awarded the 2015 Brockhouse Canada Prize for Interdisciplinary Research in Science and Engineering by NSERC.